The self-propelled tiny capsules remove the outer shell and transport the drug directly to the tumor cells. The role of these micro-robots was confirmed in the mouse intestines. Perhaps one day, they will become targeted treatments for cancer and reach some hard-to-reach areas of the body. Related results were published in Science-Robotics.

"When the capsule reaches the tumor, we can activate it, rupture the capsule and release the micromotor, which will move in the tumor area. This move is very important for drug delivery," said Wei Gao of the California Institute of Technology. 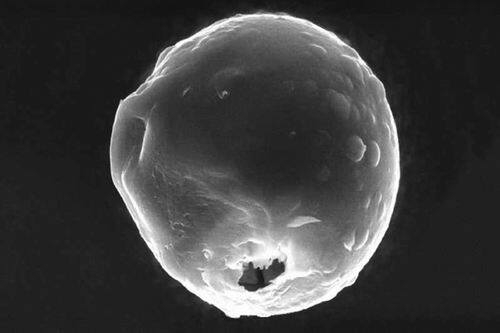 Gas escapes from the hole and powers the movement of the capsule. Image source: Wu, et al.

Gao and colleagues tracked the capsule as it entered the mouse's intestine and approached the cancer cell. Once they reach the target location, they illuminate a capsule with a strong infrared light. The capsule heats the gold and releases the drug, while also releasing magnesium, which produces hydrogen bubbles by chemical reaction with the intestinal fluid. This gas is released from the 2 nm hole left in the outer shell, powering the capsule around the intestine, just as a tiny balloon releases air while flying.

Researchers say that the delivery of drugs in the gastrointestinal tract is a tricky problem because everything is moving, so the drug is washed away before it is treated. "We need long-term release. Micromotors move around the tumor, so they can penetrate the tumor tissue and release the drug slowly over a long period of time," Gao said.