In a new study, researchers from the Jonah Research Center at the Howard Hughes Medical Institute in the United States carefully unraveled more than 1,000 entangled neurons and tracked the branching path of each cell in the brain. To determine where it is going and which cells are connected. They reported that these neurons would stretch more than 80 meters if placed end-to-end. Related research results were recently published in the journal Cell, entitled "Reconstruction of 1,000 Projection Neurons Reveals New Cell Types and Organization of Long-Range Connectivity in the Mouse Brain." 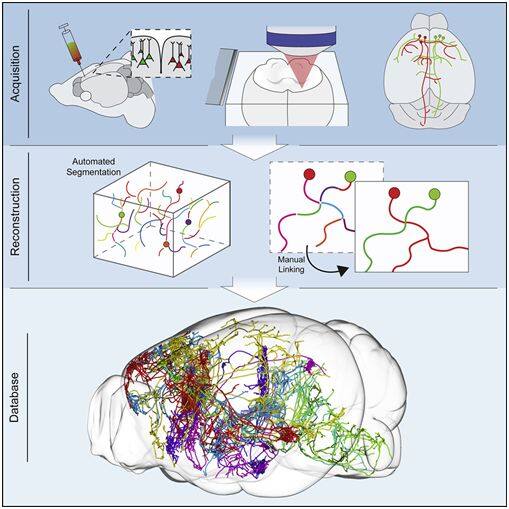 Two years ago, when Jayaram Chandrashekar and his colleagues began their neurographing work, neuroscientists had a general idea of ​​which areas of the mammalian brain were talking to each other. However, the information transfer architecture in the brain is largely a mystery. A complete neural circuit diagram can help scientists better understand how the brain is connected and how information is transmitted through this neural circuit. In October 2017, MouseLight, a neuron tracking project team, released data on the top 300 neurons. Today, they have greatly expanded this data set and added more than 700 neurons. Chandrashekar said, "This is by far the largest collection of such neurons."

Over time, the team streamlined their neuron tracking process. First, they injected the virus into the brain of the mouse, allowing a few neurons to glow. They then used an optical microscope to capture high-resolution images of the illuminated neurons. The computer program stitches together 20,000 formed images to form a three-dimensional map of the mouse brain. Chandrashekar said, “It’s like putting together 20,000 pieces of LEGO bricks.” Algorithms and software developed in collaboration with the Scientific Computing Group at the Jonah Research Center at the Howard Hughes Medical Institute can help scientists track the intertwinedness of individual neurons. path. Currently, tracking a single neuron takes about a day, but a few years ago it took a week or two.

These preliminary data reveal new clues about how the mouse brain is connected. In some areas of the brain, neurons aggregate into discrete categories. In other brain regions, neurons cannot be easily classified into specific types. Chandrashekar said that it is unclear what it means to spread information in the brain, but this is a goal for future research.

Still, most of the mouse brain (containing about 70 million neurons) is still an unknown wilderness. Karel Svoboda of the Jonah Research Center at the Howard Hughes Medical Institute estimates that even if there is a vague understanding of the entire brain's connection system—the equivalent of a tourist map that marks important landmarks, you need to track about 100,000 neurons.

So far, MouseLight has focused on rebuilding neurons in the brain, motor cortex, lower limbs, hypothalamus and thalamus that scientists at the Jonah Research Center at Howard Hughes Medical Research are studying. For example, Svoboda uses MouseLight data to identify different motor control pathways in mice.

However, the project is still evolving. The MouseLight team shared their ever-expanding data sets online. Chandrashekar wants other scientists to join their neuron tracking efforts.