What Is HPMC Capsules —— a Alternative To Gelatin

Pill capsule is one of the most important ways for people to take oral drugs over the last hundred years, and gelatin becomes the first choice for capsule materials because of its low price and stable chemical and physical properties. As the wide usage of the gelatin, some of its problems were gradually revealed. On the one hand, because early gelatin is often made from the bone and skin of cattle and pigs, many diseases are thought to be easily transmitted by gelatin capsule, such as mad cow disease (bovine spongiform encephalopathy). And these ingredients may be unacceptable to vegetarians, Jews, Islamists or Hindus. On the other hand, the development of various New Chemical Entity causes more requirements for using gelatin capsules. For example, some substances containing aldehyde groups may cause a cross-linking reaction of gelatin, and with strong reducing substances, the gelatin will cause Mailard Reaction, and so on. Therefore, many experts started to look for a new alternative for capsule material, which would be safer and healthier. HPMC (HYDROXYPROPYL METHYLCELLULOSE) is one of the suitable alternatives, and then it comes out HPMC capsule.

The first patent of the capsule which is for replacing the gelatin-based capsule in the market was filed in 1950 by HW Murphy of Eli Lilly and Company. There were many problems with the early HPMC, and Taizo Yamamoto, Kenji Abe, and Seinosuke Matsuura et al Qualicaps Co Ltd proposed improvement project (US Pat. Nos. 5,264,223 and 5,431,917). Then the project is further improved by Suheung Capsule Co., Ltd., Warner-Lambert Company, etc. The first trademark Vegicaps was registered by G S Technologies Inc. (now owned by R.P. Scherer Technologies) in 1989. Compared to gelatin capsules, HPMC capsule is with a higher price due to its more complex process and more expensive raw materials.

The HPMC Capsule is mainly composed of HPMC and purified water. According to the specifications written by JEXFA at the 74th Session (2011) and published in JECFA Monographs 11 (2011), the basic descriptions are as follows:

DEFINITION Hydroxypropyl methyl cellulose is a methyl cellulose modified by treatment with alkali and propylene oxide by which a small number of 2-hydroxypropyl groups are attached through ether links to the anhydroglucose units of the cellulose. The article in commerce may be further specified by viscosity.

It is a kind of substance that is harmless to the human body. After many years of improvement, it is very suitable for use as a capsule raw materials.

According to the JECFA database, there no limit for acceptable daily intake of HPMC, and GRAS (No. GRN 000213) record it as a safe material.

Hydroxypropyl methyl cellulose (HPMC) was placed on the agenda of the present meeting following a request for the revision of the method for the analysis of propylene chlorohydrins described in the specifications. The Committee replaced the method for the determination of propylene chlorohydrins in HPMC and increased the limit to not more than 1 mg/kg for the

sum of both isomers of propylene chlorohydrins.

In consideration of the proposed revision of the limit for propylene chlorohydrins, the Committee took into account the extensive available toxicological database, most notably studies conducted by the United States National Toxicology Program. These data, together with the Committee’s previous estimate of dietary intake of HPMC, indicated that levels of propylene chlorohydrins up to 1 mg/kg in HPMC were not of toxicological concern.

The capsule size shall follow the international regulation and you could find details in the ‘pill capsule size chart’.

It is worth mentioning that, through a large number of comparisons, the quality and size of HPMC capsules are found to tend to be more stable than that of gelatin capsules. This may be because HPMC is easier to control the size, or it may be because the production process of HPMC is more complicated which means HPMC capsule manufacturers have more sophisticated technology, formulations, and equipment, to keep consistent size performance of HPMC capsules.

Kuentz M, Rothenhäusler B and Röthlisberger D did many comparative experiments on gelatin and HPMC. Gelatin capsules have higher stiffness and hardness values than HPMC capsules, especially when the humidity is above 60%. With a given humidity, HPMC capsules absorb less water than gelatin capsules (Nagata also gave similar data in 2001). 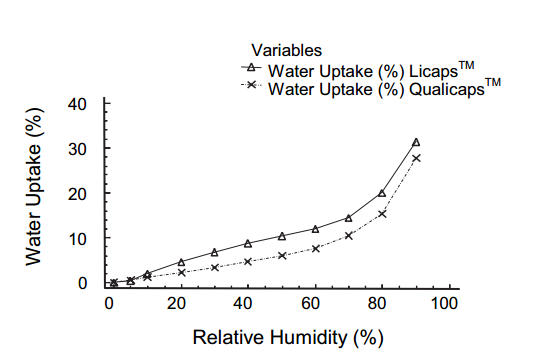 And the Physical State of Polymer Systems of the Gelatin and HPMC According to Water Content is shown as below:

For more details of the experiment, you could find in their paper ‘Time Domain 1H NMR as a New Method to Monitor Softening of Gelatin and HPMC Capsule Shells’.

While observing HPMC capsule with a microscope, it is with a smoother surface than gelatin capsules, smaller Average shell thickness, RDS and Measurements, and larger Max gap.

A detailed report can be found in the M. Sherry Ku et al. Performance qualification of a new hypromellose capsule: Part I. They also indicate that HPMC capsules have better resistance to breakage and better elasticity. In terms of water absorption, they have the same conclusion as mentioned above. In other respects, such as the abandon rate of automatic capsule filling machines, gelatin capsules have obvious advantages.

Iincompatibility of gelatin capsules with lactose is well known, and HPMC performs well in this respect. In the test by M. Sherry Ku et al., they used lactose spiked with 25 ppm formaldehyde (HCHO) (a known cross-linking agent) to compare with the capsules in Cross-linking susceptibility. After storing for 1 week under room temperature, there was no change in the dissolution of hypromellose shell, while the dissolution of the gelatin capsule shell slows down significantly.

In terms of disintegration, capsules produced by different manufacturers are different, mostly between 5-30 min, but there is nearly no difference in their pharmacokinetic parameters are not much.

For sure, there are many different properties among different HPMC capsules, such as whether using gelling agents. It is necessary to evaluate according to specific capsules and internal medicines, and cannot be generalized.

According to Tanvi Sapatnekar and Garima Chandra's Empty Capsules Market Analysis, the global empty capsule market in 2017 is about $1,841.5 million, and is expected to reach $3,707.5 million in 2025. The market share of gelatin capsu les and Non-gelatin capsules is shown in the chart below.

Although raw materials of Pig meat and bovine meat still play the dominant role in the market, the market share of HPMC will increase in the future. Other types of capsules click Different Types of Capsules to view details.